By downloading our ebook you also agree to receive
occasional emails about The Imagine Project.

When Trauma Happens in a Classroom or School 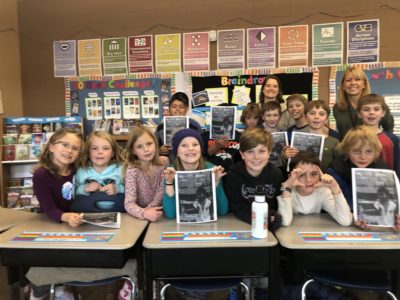 Unfortunately, we live in a world where trauma happens. It might be a school shooting, a natural disaster, or a significant loss of a student, teacher, or admin, but it happens more often that we’d like. I recently sat in with a classroom of 4thgraders who lost a fellow schoolmate to a fatal disease—a significant school trauma. Their journey in understanding what happened is complicated, but I was grateful to be there to help them through it using The Imagine Project.

Drew Rushton is described as a fun-loving, kind, silly, Dennis the Menace type kid who was a ray of sunshine in the eyes of those who had the honor of knowing and loving him. He knew no enemies and was gracious to everyone—which means he had a lot of friends who will miss him. With the loss of Drew comes great sadness to many, particularly his friends and classmates. I was asked by a 4thgrade teacher to come in and help start The Imagine Project process just about 2 weeks after Drew’s passing. Drew was not in this particular classroom, but he was the same age and many of the kids were friends or had known him from previous classes.

The second step of The Imagine Project asks the kids to write a down something that has been difficult for them in their lives. Yes, even young kids have experienced tough times, the most common are moving, loss of pets or grandparents, injuries, or parents divorcing. Sadly, in the class there were more than a handful of kids who wrote down, “Drew”, just “Drew”. For a few of the students, it was all they could write. They couldn’t add any more details, just “Drew”.

Step 3 asks each student to write an Imagine story—telling in more detail the story of their difficult experience—each sentence begins with the word Imagine…  Ann Henderson, their teacher (who was wonderful BTW), and I walked around the classroom helping them with ideas, spelling, how to write, etc. There were a few kids who were able to write their feelings about Drew, even though it was hard, they found the words. But there were a few more that had a hard time saying what was in their hearts and minds. They wanted to write, but it was too hard for them, they didn’t want to cry, and they knew they would. It’s painful to talk about a loss that still hurts. We encouraged them, but they just couldn’t. So we honored their feelings and after some time writing, we brought everyone together in a circle. Bravely, one little boy read his story about Drew out loud to the other kids.

Imagine having a friend who was incredible.

Imagine thinking that friend would be okay even though he had been through a lot.

Imagine seeing his body and signing the casket.

Imagine going to his celebration of life and hearing stuff about him you never knew.

As Gavin read his story I watched the other kids, particularly the ones who struggled writing their stories. They were fighting back the tears, hearing and feeling similar emotions. After they read their stories (those that wanted to) we talked a bit about how hard it was to not have Drew there anymore. I was even able to do a group round of tapping (Emotional Freedom Technique—see below) with the kids which really helped them let go of some of their sadness and move into the comfort of knowing Drew is in a better place.

There is such comfort knowing others feel the same as you do when you’re hurting. It doesn’t necessarily take the pain away, but it helps. I’m told over and over again by teachers and counselors that The Imagine Project brings out buried feelings and opens up avenues of compassion and empathy for kids (and adults). A child writing about a difficult time is powerful, hopeful, and healing—and they love it! They want to share how they feel and many of them just don’t know how—it’s not a skill we always teach to kids, but it’s so important.

Giving a classroom, school, or community the opportunity to work through a traumatic time is critical for healing and bringing kids and adults together in a comradery they may never have experienced before. They grow together in healing, love, trust, and empathy because they understand each other and themselves a little bit better.

If your school, classroom, group, or community has experienced any sort of traumatic experience, it’s helpful to have those involved write their Imagine stories together. By writing and sharing, there is a deeper understanding of our own hearts and minds, and those around us. What a great way to bring people together and embrace the amazing human resilience. We are all resilient, it’s just easier when you have others who understand and maybe even feel similar.

Ms. Henderson had this to say after doing The Imagine Project with her class:

“My overall takeaway is that the project gave the students permission and encouragement to write and talk about their feelings in an open and safe forum. A very few students have had some counseling before and sharing in this way has been normalized, but many students have had less exposure to the idea that they can/should get their feelings out and learn how to process them. With a common trauma, I think this is especially important because the kids know that other peers are finding this difficult time too, and that it’s ok to feel upset and ungrounded at the moment.”

She added the next day that the kids were overall calmer too. Does The Imagine Project help with childhood trauma—absolutely. Is it easy to implement—yes! Will it bring up emotion for everyone, probably, but you can always try using Emotional Freedom Technique (EFT) with yourself and the kids to help. If you want to learn more about EFT (also called tapping) you can google it and watch a few YouTube videos or I explain how to use it in my book: The Imagine Project: Empowering Kids to Rise Above Drama, Trauma, and Stress. The Imagine Project Journals can be downloaded for free here.

Wording I used for group tapping in this classroom—the kids repeated after me and tapped where I tapped:

“Even though I’m sad Drew is gone, I love and accept myself” (above the eyebrow)

“Even though it’s hard not to have Drew around anymore, I love and accept myself” (under the eye)

“Even though I’m sad Drew is gone, I love an accept myself” (under the nose)

“It’s hard to lose someone you love” (chin)

“I wish I could see him again” (under the arm)

“I know my feelings will get better” (nose)

“It helps to know he’s in a better place” (chin)

“He’s happy and that makes me feel better” (eyebrow)

**The trick to tapping is using the points that are typical in tapping and saying what the other person/student might be feeling. You may not know exactly what they are feeling, but you will have a sense and you can try a few different emotions/thoughts to get to their general thoughts. After acknowledging their painful emotions it’s important to bring them around to positive thoughts, gently.

Thank you and happy Imagining!

The Imagine Project, Inc. is a 501c3 organization, we appreciate your continued support helping kids!

© 2022 Dianne Maroney and The Imagine Project, Inc. All Rights Reserved.