By downloading our ebook you also agree to receive
occasional emails about The Imagine Project.

Imagine… finding out you had a brain disease

Imagine… finding out it has no cure

Imagine… only being nine years old

Imagine… being angry but not knowing who to be angry at

Imagine… just wanting people to treat you like your normal again

Imagine… having to have 20+ brain surgeries

Imagine… realizing God has a plan for you

Imagine… knowing that you have the choice to choose Joy and Strength over Sadness and Fear, no matter how you might feel

Imagine… knowing that your illness has a purpose

Imagine… knowing that you have a purpose

Imagine… not letting your diagnosis win 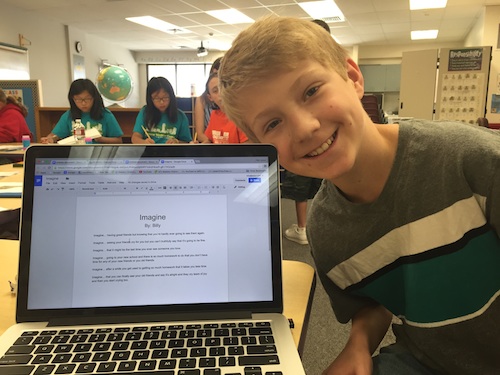 Imagine… having great friends but knowing that you’re hardly ever going to see them again.

Imagine… seeing your friends cry for you but you can’t truthfully say that it’s going to be fine.

Imagine… that it might be the last time you ever see someone you love.

Imagine… going to your new school and there is so much homework to do that you don’t have time for any of your new friends or your old friends.

Imagine… after a while you get used to getting so much homework that it takes less time.

Imagine… that you can finally see your old friends and say it’s alright and they cry tears of joy and then you start crying too.

Imagine… you left your country to have a better life. Imagine…you need to travel by train so others don’t see you.

Imagine… you need to walk in the desert for days and days.

Imagine… you need water but you don’t have any for days.

Imagine… you are not with your family anymore.

Imagine… when you come to the U.S., you get a new life.

Imagine… now you can be with your dad, mom, and sister.

Imagine… having good grades in school.

Imagine… waking yourself up before the sun to take an hour-and-a-half-long bus ride to school.

Imagine… your legs burning from standing at a bus stop for hours to get home during a fierce Colorado snowstorm.

Imagine… having gone to eleven schools by the time you’ve entered the 9th grade.

Imagine… moving so often that you’re numb to the feeling of packing everything you own in trash bags.

Imagine… knowing the term “at-risk” at such a young age that you didn’t yet know the definition of “success.”

Imagine… falling asleep much too early at a friend’s sleepover because it’s the rst time in a long time that you slept in a bed—not on the floor.

Imagine… a single mother and her three children being crammed into basements, churches, and motel rooms.

Imagine… her abandoning you at 14 years old.

Imagine… finding out four years later that she, along with your older brother, were diagnosed with schizophrenia.

Imagine… never having a stable home.

Imagine… despite your loneliness, a silver lining of hope steadily vibrating in your soul.

Imagine… looking beyond the brokenness of your life.

Imagine… God bestowing you the gift of alchemy—turning pain into determination.

Imagine… wanting to succeed with the same intensity as you’d want to inhale while suffocating.

Imagine… floating above your city during a sunrise in an unlikely helicopter ride.

Imagine… being blessed with such a helicopter ride that it inspires you to continuously remain thousands of feet above civilization.

Imagine… pushing yourself to succeed further than most are willing to go.

Imagine… making the decision to become an airline pilot, despite knowing that black female pilots who come where you come from are far rarer than being struck by lightning—twice.

Imagine… just like lightning, you are an immovable force.

Imagine… finishing your rst year in college as the first person in your entire family.

Imagine… fighting a constant uphill battle, but beginning to feel the warmth of leaving the shaded side of the hill.

Imagine… sunlight breaking through those clouds with an iridescent beam.

Imagine… breaking through the circumstances you were given and getting a college scholarship to become a pilot.

By Kamia, freshman in College

Imagine…being judged for who you are

Imagine…trying to understand why they picked you.

Imagine…holding it all in from everyone including you family

Imagine…it slowly getting worse once your older.

Imagine…the day you finally spoke up

Imagine...the feeling your not alone anymore

Imagine…how I kept my head up through the bullying

Imagine…it not getting the best of me…

Imagine…if I never spoke up…

Imagine… growing up in a home where dreams are appreciated.

Imagine… having other parents and people asking you what your back up plan was.

Imagine… feeling the pressure to be so great early on in your life.

Imagine… having to work harder than all the other kids in school and still not succeeding the way you want to.

Imagine… growing up too fast.

Imagine… almost being struck by lightning.

Imagine… being in a long term relationship with your first love and never getting closure for why it ended.

Imagine… falling asleep at the wheel on the highway.

Imagine… being sexually assaulted after saying no and guilted by the person who assaulted you.

Imagine… being addicted to drugs.

Imagine… having a wake up call and realizing you can stop this.

Imagine… having to quit on your own and doing so successfully..

Imagine… knowing exactly what you want, but feeling hopeless and like it is lightyears away.

Imagine… dealing with depression and anxiety.

Imagine… surrounding yourself with people who take advantage of your energy.

Imagine… graduating college and going from having structure always to not knowing where to go from there.

Imagine… feeling isolated while simultaneously knowing you have so much life inside of you.

Imagine… keeping your faith through it all.

Imagine… restructuring your energy field and attracting more positive people in your life.

Imagine… feeling that you are meant for so much more and knowing you will get there.

Imagine…how much stronger I am with him.

Imagine…how much more exciting life is with him.

Imagine…how much we love him.

Imagine…if he didn’t have ADHD or Tourrettes

Imagine…me getting used to him.

Imagine…him getting used to himself.

Imagine…if there was a permanent cure.

Please submit your story if you’d like it placed here…

The Imagine Project, Inc. is a 501c3 organization, we appreciate your continued support helping kids!

© 2022 Dianne Maroney and The Imagine Project, Inc. All Rights Reserved.